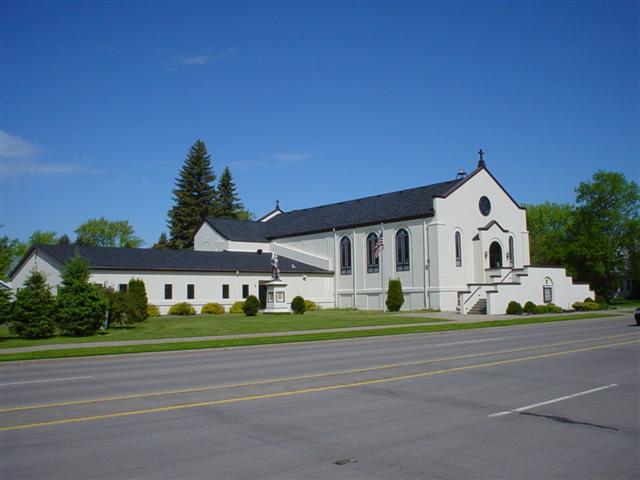 South Superior owes its existence to the boom years of 1890-93. Industries such as the chair factory, wagon works, stove factory, windmill factory, a large cooper shop, and bicycle factory offered employment to many. For the convenience of the many Catholics living in South Superior, Fr. Joseph Hermon from Sacred Heart Parish on 12th and John Avenue established St. Mary’s Mission in 1893. A temporary church was built at John Avenue and 66th Street. Eventually, a frame church was built at 5601 Tower Avenue. St. Mary’s continued to be served by Sacred Heart Parish, which eventually became the first Cathedral in Superior.

Fr. Charles Weber was the first resident pastor in 1893, followed by Fr. John Klopp. After a year (1894) the parish became a mission again of St. Patrick’s in Billings Park. By 1913 Fr. John Zwindler was assigned as a new resident pastor. A year later, a fire destroyed the frame church. Plans for a new structure began. In 1918 Fr. James Fagan was appointed pastor. It was during this time that the parish began to be known as Holy Assumption. The present frame and stucco church was built in 1925. The current rectory was purchased a year later (1926). Prior to that, pastors occupied rooms in several residences. In 1919 a house was purchased at 54th and Tower and served as a residence until 1926.

Fr. Gerald Mahon succeeded Fr. Fagan as pastor in 1931 and served for 13 years. After moving to St. John’s in Birchwood, WI in 1944, Fr. David Ross King was named pastor. Fr. King had the longest term as pastor, serving until 1967. He was also on the faculty of Cathedral High School and served as Superintendent of Education for the Diocese.

Fr. George Gleason came for one year. He was followed by Fr. Eugene Teofilo (1973-76) and Fr. Ed Beutner (1974-78). In 1978 Fr. James Jackson came to Holy Assumption and served for six years. It was during his pastorate that the new addition with the offices and classrooms was constructed. He was succeeded by Fr. John Spanjers in 1984 who served for nine years.

In 1993, Fr. George Votruba was appointed pastor. During his administration a major renovation project involving the church and grounds took place. The parish was also clustered with its sister parish, St. William in Pattison Park, during his term. Due to illness, he retired in 1998.

Fr. Ronald Olson, OFM Conv, the current pastor, came to Holy Assumption in January 1999. Many changes have taken place in Superior during the past century. Our parish community has endured from the 19th Century to the 21st as a Community of Faith. Our church stands as a beacon of hope and light of faith. It is a living testament of generations long gone.

May Our Lady of the Assumption continue to guide and inspire her faithful sons and daughters in the years to come.