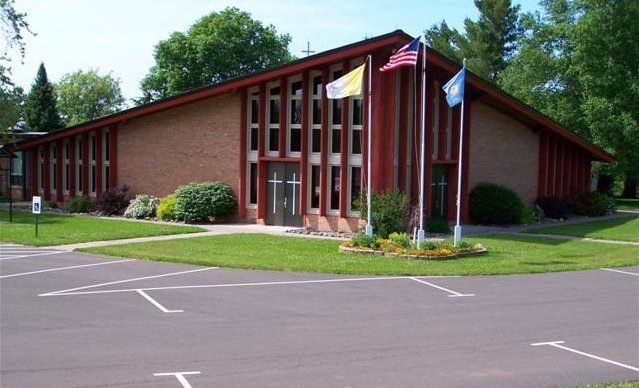 We, the people of St. William Parish, united as a rural Eucharistic Community believe that as faithful followers of Jesus we are called to bring His Gospel alive through our example

We strive to promote the faith and growth of each individual through worship, education, involvement, and service; keeping in mind that true unity can only be accomplished with respect for diversity.

We are committed to bringing Christ’s peace and justice into a discordant world.

Our present parish goes back to 1908 when it was established as St. Aloysius Congregation in Dedham by Bishop Schinner, the first Bishop of the new Diocese of Superior.  Little remains of the Village of Dedham in the area of Foxboro.  The original Polish community was served by Fr. A. Gagnon from St. Louis Parish in Superior, who offered occasional Masses in their homes.  By 1910, a church was built on land donated by Adam Olow and Stanley Malinoski.  Funds for the building were raised by Mrs. Andrew Herubin and Mrs. Adam Olow, using reclaimed lumber from a hotel in Dedham.  The church was served by several priests from Superior, the most notable being Fr. Frances from St. Adalbert’s in the East End of Superior.  He was given pastoral care of St. Aloysius in 1919 and provided monthly Masses at the mission.  By 1954, Bishop Joseph Annabring established St. Aloysius as a parish with Fr. Cyril Sirek as pastor.  Three years later, it was decided to build a new church a mile from Pattison Park on a five-acre parcel of land donated by William Stupak and Robert Mansky.  The Extension Society of the U.S. assisted financially and renamed the parish in honor of St. William, the Abbot.  Construction of the new church was completed in the summer of 1958 and the first Mass was offered there on September 28, 1958.  The blessing and dedication of the parish took place on November 23, 1958, with Bishop Annabring officiating.  In 1963, a rectory was added to the church-parish hall complex.  Fr. Sirek served as pastor until 1962.

January 2010 brought new changes for our cluster.  Fr. Philip Heslin returned as the Supervising Pastor, only this time he is serving 3 parishes.  Fr. Don Kania became the Associate Pastor of the 3 parishes.  Fr. Heslin was formerly Moderator of the Curia of the Diocese of Superior, and late in January 2010, he became Monsignor Heslin.

September 2010 brought yet another change to the clustering of St. William.  We were again clustered with Holy Assumption Parish in Superior, with Fr. Ron Olson, OFM Conv again named as our pastor.

In September 2008 St. William Parish celebrated 100 years of existence.  It remains a vibrant community of faith, welcoming many to its variety of religious and social activities.  St. William, the Abbot, a hermit-monk, would be very much at home in the beautiful surroundings of Pattison Park, which is home for many of those who worship here.